Shop Windows to the Universe

Learn about planets outside our solar system through Exoplanets and Alien Solar Systems by Tahir Yaqoob, Ph.D., a book in our online store book collection. This is an artist's impression of the dwarf planet Haumea and its two moons (distance not to scale). Haumea's equatorial diameter is as large as 2,000 km, but the distance from its North Pole to its South Pole is about 1,000 km - only about half as far!
Click on image for full size
Images courtesy of NASA, ESA, and A. Feild (STScI).

The Poles of the Dwarf Planets

As of June 2009 there are officially five dwarf planets: Pluto, Ceres, Eris, Haumea and Makemake. At least four of them are icy objects reminiscent of the cold polar regions on Earth. Although our knowledge of most of these bodies is limited, we have discovered a few interesting tidbits about the poles of some of the dwarf planets.

Pluto, Eris, Haumea and Makemake are all trans-Neptunian objects (TNO) which orbit on the frozen fringes of our solar system far from the warmth of the Sun. Pluto, Haumea and Makemake all lie within a region called the Kuiper Belt. Eris ventures even further out; it is currently about 3 times as far away from the Sun as Pluto! Unlike the rocky planets of the inner solar system (Mercury, Venus, Earth and Mars), these dwarfs from the distant fringes have interiors mostly composed of ice. Not surprisingly, their surfaces are icy as well. At the low temperatures found in the Kuiper Belt (around -370° F or -220° C), it isn't just water that freezes solid.

The surface of Pluto is primarily coated with frozen nitrogen as well as lesser amounts of methane, carbon monoxide, and possibly ethane ices. During part of the long plutonian year some of these ices are warmed enough that they sublimate into gaseous form, providing Pluto with a temporary atmosphere. Pluto may have a polar ice cap of nitrogen ice at its South Pole. The surface of Makemake is coated with methane, ethane, and possibly nitrogen ices; it has much less nitrogen ice than Pluto or Neptune's moon Triton. Astronomers have also detected methane ice on the surface of Eris. Strangely, Haumea appears to be covered with the more familiar water ice, which makes its surface as bright as snow.

Ceres, the other dwarf planet, orbits much closer to the Sun in the main asteroid belt between Mars and Jupiter. The surface of Ceres is rocky, like the surfaces of most asteroids. However, scientists think that Ceres may have an icy mantle that accounts for about a quarter of its mass and is located beneath its rocky surface and above its rocky core. Some of this ice may occasionally convert to gaseous form and "leak out" to the surface of Ceres. Scientists may have observed such outgassing of water vapor near the North Pole and have seen possible signs of frost on the asteroid's surface.

What of the poles of the dwarf planets? Lacking decent images of Makemake, Haumea and Eris, we simply don't know the orientations of their spin axes (and hence whether their poles are tilted like those of Uranus or are upright like those of Mercury). Pluto and Ceres represent the extremes of dwarf planet "tilted-ness". Pluto spins on its side; its axis is tilted about 120°. Pluto's poles take turns basking in feeble summer sunlight for more than a century, then "shivering" in perpetual darkness throughout a very long winter. Ceres is virtually upright, with a tilt of just 3°. With such an upright "posture", Ceres has essentially no seasons.

Although we cannot observe its tilt, we do know that Haumea spins rapidly around on its axis. A "day" on Haumea lasts just 4 hours; that's the fastest rotation rate of any object larger than 100 km across in our solar system. This rapid spinning has stretched Haumea into an oval shape. Although it is as much as 2,000 km in diameter at the equator, the spinning has squashed its polar diameter down to half that size at roughly 1,000 km. Haumea's odd water-ice surface, fast rotation rate, and oblong shape may all be clues that this dwarf planet was involved in a major collision millions of years ago.

The Fall 2009 issue of The Earth Scientist, which includes articles on student research into building design for earthquakes and a classroom lab on the composition of the Earths ancient atmosphere, is available in our online store.

Pluto is a frigid ball of ice and rock that orbits far from the Sun on the frozen fringes of our Solar System. Considered a planet, though a rather odd one, from its discovery in 1930 until 2006, it was...more Eris is a dwarf planet that was discovered in 2005. Eris is a trans-Neptunian object (TNO) that orbits the Sun on the frozen fringes of our Solar System beyond the Kuiper Belt. Eris takes 557 years to...more 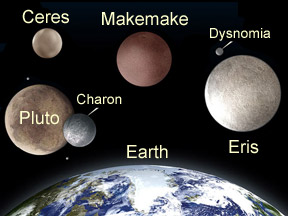 Makemake is a dwarf planet in our Solar System. Makemake was discovered on March 31, 2005 by a team of astronomers led by Mike Brown of the California Institute of Technology. The International Astronomical...more 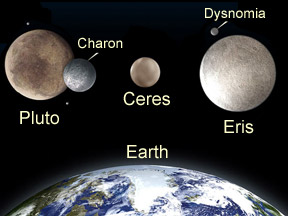 In 2006 the International Astronomical Union (IAU) approved a new classification scheme for planets and smaller objects in our Solar System. Their scheme includes three classes of objects: "small solar...more 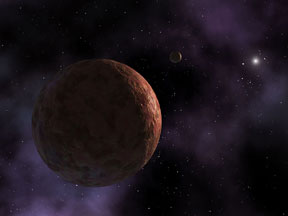 There are many icy and rocky planetoids on the outer edge of our Solar System. As a group, all bodies that orbit, on average, further from the Sun than the 8th planet Neptune are called Trans-Neptunian...more The cryosphere includes the parts of the Earth system where water is in its frozen (solid) form. This includes snow, sea ice, icebergs, ice shelves, glaciers, ice sheets, and permafrost soils. Approximately...more

Nitrogen is a chemical element with an atomic number of 7 (it has seven protons in its nucleus). Molecular nitrogen (N2) is a very common chemical compound in which two nitrogen atoms are tightly bound...more

Global Learning and Observations to Benefit the Environment

Windows to the Universe, a project of the National Earth Science Teachers Association, is sponsored in part is sponsored in part through grants from federal agencies (NASA and NOAA), and partnerships with affiliated organizations, including the American Geophysical Union, the Howard Hughes Medical Institute, the Earth System Information Partnership, the American Meteorological Society, the National Center for Science Education, and TERC. The American Geophysical Union and the American Geosciences Institute are Windows to the Universe Founding Partners. NESTA welcomes new Institutional Affiliates in support of our ongoing programs, as well as collaborations on new projects. Contact NESTA for more information.